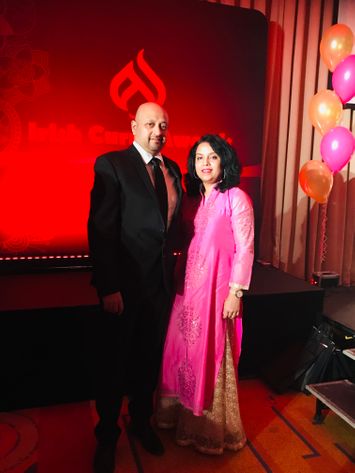 Hi, I’m Joy and I am the head chef of Sligo’s Joy Kitchen. I was born in a small village called Khanyan in Eastern Part of India, West Bengal and was the eldest daughter in the family. From an early age, I was always very career-focused, very studious, and my ultimate goal was to become a reputable engineer like my father. This, however, did not happen in the end.

My mother was, and is, an exceptional cook. I was not all that interested in cooking because my mother had always prepared and cooked everything for the family. My younger sister and I were told to focus on our studies rather than on household chores. For a family in a rural Indian village, we were very progressive for the time; both my sister and I were constantly motivated towards our careers rather than settling into a marriage. Amidst this, I absolutely loved the traditional Bengali food my mother had always ready for us.

My mother learned all her cooking first-hand, and had old traditional recipes passed down by my grandmother who was an expert in Mughlai cuisine. Her specialty dishes were Biryani, Mughlai Paratha, and Chicken Mughlai. We used to go to restaurants occasionally to taste some other kinds of food and different recipes. It would be our family weekend outing to destress from the hustle and bustle of the week. We would regularly have Kolkata street food. Some of the food I could not stop eating were the famous phuchka chicken roll also known as a kathi roll. The chat, special to Indian street food in general, was my go-to snack after school or college.

Interestingly, my ambition to be an engineer died after many attempts to enter the industry, but I still always had that plan in the back of my mind. At this stage, I had finally married my husband Anirban who worked as a dairy engineer, and we shared the same passion for food, eating out, and trying new things did not stop. I did miss my mother’s food terribly and tried to replicate the same flavour but it just wouldn’t be the same.

The Start of My Culinary Career

After our marriage, we moved to Nasik, near Mumbai and my culinary journey of actively learning different styles and delicacies of food really began. I started learning the local state, Maharashtrian food, from my neighbour, I would often go to their house for lunch or evening meals and have some tea and chat but we would be always cooking something. Some of my neighbours were South Indian as well, they introduced me with South Indian delicacies, well-known dishes like Dosa, Idli, Uthapam, Sambar, Appam, lots of varieties of chutneys etc.

I learned a lot of the basic culinary skills that I use still today in my cooking from those lovely Aunties, my neighbours. After few months in Nasik, my husband and I transferred to Punjab and we landed in North Indian food hub- Ludhiana. Within Ludhiana, there is a big mixture of Indian people from all over India. The time I had spent there I still remember and miss to this day. We spent a lot of time in Ludhiana. I fell in love with the explosion of different types of techniques and different flavours of food.

I had a very good relationship with my landlady who I used to cook a lot with, which was not an unusual thing at the time. The ladies who were the wives of the families would often have chats and tea and cook together for their families. I really enjoyed that culture of sharing and breaking “naan” together! Through that, I got to learn a whole lot more, I was very quick to pick up little tricks and skills here and there.

Some of the recipes in our current menu have been inspired by those amazing ladies and aunties some of which are the Butter chicken, Tandoori Chicken, Chicken Tikka masala, Daal Makhani, Aloo Paratha, Sahi Butter Paneer. I had my first son around that time too, and from a very early age, he shared the same love of food as me and my husband.

My Husband was lovely and supportive throughout all this and encouraged me on my career but nothing happened, all my opportunities to become an engineer and software engineer fell short. It was a very frustrating time for me but I was very happy and appreciated my husband was with me.

After few years, and through the progression of my Husbands career we had moved to Saudi Arabia, Riyadh and Dubai. I was introduced to a whole new cuisine of food that is quite different to the different Indian styles of cooking I was used to. Mediterranean and Arab food culture were very exciting, lot of meat and roasts and kebabs. I loved it. We still ate out, a lot, like before. Food was completely different than what I used to eat.

Some dishes that were my favourite were Khabsa (flavoured rice with chicken roast), Hummus, chicken shashlik, baba ganoush etc. These dishes were completely different from Indian Food. They used spices like Sumac, Iranian saffron which are all so rich in flavour. Iranian food with lots of dill and pistachio and rice, and then there was Lebanese food. Everything was rich and used every drop of flavour from the ingredients. They did not use as much as spices but the simplicity and combination of the ingredients was something I learned a lot from.

We spent 6 years in The Middle East before we reached the Emerald Isle, this beautiful Island. My husband’s job landed us in Letterkenny, Co. Donegal and later we shifted to Sligo where we are based today. We fell in love with this beautiful country and the kind, approachable people here. But despite this, I was missing all the taste and the cooking I learned so far.

We often invited our Irish friends to our home and cooked them a variety of Indian dishes that they loved. Most of them encouraged me to open something of my own. We ate Indian food out, but for us it was nowhere the same intensity and passion that the Ladies back in Nasik and Ludhiana had. After few years of this, I had given up on my ambition to become an engineer but I had a new goal. My son had grown older and started encouraging me also. I knew there was something to do; I had been doing this for years and acquired so much practical knowledge and food IQ straight from the streets of India and from the local ladies’ cooking sessions.

And so I started Joy Kitchen, which began as a small catering service. After 4 years Joy Kitchen has its own stall in the Strandhill Peoples Market, we have won the best takeaway in Connaught 3 consecutive years in a row, and we have expanded our takeaway service and now cater for large social gatherings like communions and weddings. What started off as just passion is now enjoyment and the food freedom that West of Ireland needs. To have the opportunity to give the years of flavour I have learned to give my food to the people around me and have a business around that is truly a blessing, the authentic Indian food experience is available for everyone.

We still have a lot to grow and we will be adding more tested recipes and more unique experiences to your palate very soon!

Strictly necessary cookies
These cookies are essential for visitors to be able to browse the website and use its features. None of this information can be used to identify visitors as all data is anonymized.

Currency
Purpose: To be able to show prices in the currency matching the visitor's preferences.
Duration: 30 days.

Google Recaptcha
Purpose: To be able to validate whether the visitor is human and to limit the amount of spam from contact forms.
Duration: 1 year.
Provider: Google.


Third-party cookies
These cookies collect information about how visitors use the website, like which pages they've visited and which links they've clicked on. None of this information can be used to identify visitors as all data is anonymized.

ga
Purpose: Registers a unique ID that is used to generate statistical data on how the visitor uses the website.
Duration: 1 year.
Provider: Google.

gid
Purpose: Registers a unique ID that is used to generate statistical data on how the visitor uses the website.
Duration: 24 hours.
Provider: Google.

We also integrate with social platforms on this site that allow you to connect with your social network in various ways. Social media integration will set cookies through the website which may be used to enhance your profile on social media sites or contribute to the data they hold for various purposes outlined in their respective privacy policies.